Vivaan was born normal just like any other kid, but to our surprise, he was unable to reach a predetermined milestone within a specific time frame. After learning more about his condition and consulting with multiple doctors, they came to the conclusion that he had Autism Spectrum Disorder. He had developmental delay, and processing disorder and was totally non-verbal. He was usually hyperactive and self-occupied.

We decided to undertake extensive speech and occupational therapies in the hopes that they would eventually guide Vivaan in developing his speech and processing disorder. However, the fact that he was not responding to sessions was incredibly stressful for us. Finally, Vivaan received stem cell therapy from Advancells in India. It was a quick 3 days procedure, wherein they used donor cells for the therapy. They have an incredible facility that goes far and beyond, supportive staff, and a very genuine and proficient attending neurosurgeon. 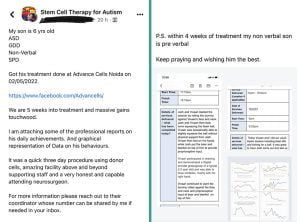 It’s been more than a month since therapy and the improvements are tremendous. It seems like it has worked wonders for Vivaan! He was non-verbal and now he is pre-verbal. He said “bye” to Josh (Vivaan’s hydro therapy trainer) for the very first time! Vivaan is more confident than before and his social interaction has improved. We hope to see further improvements in the coming days. The improvement results is shown in the image that shared by Vivaan’s mother to Advancells:

Date of 2nd Therapy: 17th November 2022
Following stem cell therapy, we proceeded with additional therapies, placing a focus on ABA, occupational, and speech therapy. We also found hydrotherapy to be beneficial, especially for developing water safety skills. We believe that Vivaan is benefiting from the combination of therapy because he is now pre-verbal, his hyperactivity has decreased, and his receptive skills have improved.

We, therefore, made the decision to visit Advancells for a second dose of stem cell and exosome therapy after seeing improvements in Vivaan’s condition. On November 17, 2022, he had his second stem cell infusion, and we anticipate that Vivaan’s condition will continue to improve over the coming weeks. We will continue all of the other treatments as well because they have been so effective for Vivaan.

I definitely recommend Advancells to any parent since they have helped me throughout and they give outstanding attention to the patient’s needs.