Multiple sclerosis is a rare yet progressively fatal autoimmune disorder of the central nervous system, and is characterized with visual loss, mobility issues and paralysis. While scientists are trying to figure out the exact cause of autoimmune destruction of the protective neural myelin sheath responsible for normal impulse conduction, analysis through brain scans and MRI has revealed the formation of brain lesions at multiple locations, mainly affecting the brain stem, the cerebellum, the spinal cord, and optic nerves. On a general note, depending upon relapse and remission, the disease is categorized into four main types, such as clinically isolated syndrome, relapse-remitting multiple sclerosis, primary progressive multiple sclerosis, and secondary progressive multiple sclerosis. Person experiencing multiple sclerosis, commonly reports symptoms such as muscle weakness, fatigue, bladder problems, vertigo and dizziness.
In a conventional set-up, there is still a lack of definitive treatment protocol, which can slow down the disease progression and/or reverse the root cause of development. But the modern medicine has come up with an option of Stem Cell Therapy for Multiple Sclerosis that can prevent further disease progression, offer the benefit of symptomatic relief to the patients and also, to some extent, reverse the neuronal damage to increase functional contribution.

Procedure of Treatment of Multiple Sclerosis through Stem Cells Therapy

Must Read Articles on Multiple Sclerosis 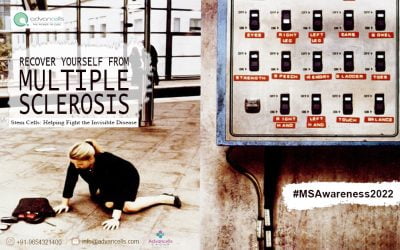 Most Common Symptoms and Causes of Multiple Sclerosis Among Women

Multiple sclerosis (MS) is an autoimmune disease that affects the brain and spinal cord. Women are more likely than men to be affected by this condition. The condition can also develop symptoms that are unique to women. However, most MS symptoms are shared by both men...

Is Stem cell therapy for Multiple Sclerosis the only hope in 2022?

Multiple Sclerosis: Can it be linked with the failure of myelin to regenerate?

The recent advancements in technology and research related to cellular medicine revealed a correlation between myelin sheath, a fatty coating responsible for insulating nerve fibers from electrical signals. In this regard, a team of scientists from the University at...

With the advent of anti-inflammatory properties of stem cells, the science of regenerative medicine has opened new avenues for treating auto-immune disorders like Multiple Sclerosis. Researchers are supporting the idea of delaying the disease progression and repairing the damage caused due to loss of neuronal contact and cellular communication, on the basis of large data gathered from different pre-clinical as well as clinical investigations.

Stem cells, isolated from different sources of the human body and coaxed in the laboratory setting to reduce autoimmune-associated inflammation, will soon be considered as the mainstream treatment for fatal, progressive auto-immune disorders like Multiple Sclerosis. Still, a lot needs to be explored on configuring effective pathways for their communication to standardize their therapeutic outcome instead of relying on the steroidal medications, which can trigger damage to other vital organs of the body. Stem Cell Therapy for Multiple Sclerosis can be considered as a safe and viable option, effective in stopping the progression and increasing overall life expectancy.

Download the information pack today to understand, everything you need to know about Multiple Sclerosis and Advancells Stem Cell Protocol.

Over the past couple of years, many clinical studies have been conducted using stem cells isolated from different sources, including but not limited to fetal derived Allogenic sources. These studies have demonstrated complete safety, feasibility as well as efficacy in reducing muscle wastage and other complications.

With pioneering experiments and outcomes in the preclinical investigations, almost 70-80% of the patients, treated at Advancells using Mesenchymal stem cells, have shown a considerable proportion of restored neural function. Although the degree of improvement is quite variable, based on reported claims, our Stem Cell Therapy can guarantee improvement in areas, such as:

The diagnosis of MS is very challenging at an early stage because symptoms may be very non-specific and indicative of other diseases of the central nervous system. The early symptoms are very temporary causing no significant damage and hence are most of the times ignored easily by the people. Additionally, as such, no specific lab test is being used, apart from MRI; which can be significantly helpful in diagnosis. The complete diagnosis is always proportional to the expert based on the criteria.

In general, MS is not considered a fatal disease, but the quality of life can be significantly affected in patients suffering from Multiple Sclerosis. As such, there is no known full proof treatment available to reduce the sufferings. However, many therapeutic and technological advances are made in the field of stem cells to find a cure for the disease.

No, MS is not contagious neither it is directly inherited. Studies have indicated a mixed effect of both genes and environmental factors on the development of MS. Research has evidently suggested that susceptible individuals may have a familial genetic contribution for MS, however, these individuals need to encounter some triggering factor from the environment to actually develop MS. The research is still underway to pinpoint the exact location of the causative gene, its environmental cause, prevention and better treatment.

Yes, stem cells are the pristine cells of the body, which can give rise to many different types of cells upon proper signalling. These cells have been exploited successfully to differentiate into neurons. They have been isolated from the very own potent sources of our body known as Bone Marrow and Adipose Tissues. They can be minimally manipulated and implanted back into the body to promote neuroregeneration. They have also identified to be an effective guiding immune system to distinguish self-tissue from the non-self, thereby reducing further destruction.

Please go through, our treatment brochures for other Multiple Sclerosis related information.